Bangkok, I have to say, is my favourite place in South East Asia. I love the buzz of the city, the amazing rail system (which is 1000x better than Sydney’s), the people, the shopping and the food! The last time we were here, we had six days and split our time between the tourist sights and experiencing the city life. It was chaotic! Since we’ve already gotten the sights outta the way, our trip this time was pretty much shopping, eating and relaxing! We even had a date night where I got all dressed up!

We headed up to the Moon Bar at Banyan Tree early in the evening for a drink while we watched the city lights turn on as the skylights disappeared into nothingness. It was amazingly cool. We generally don’t go out for drinks very much since I’m not very good with alcohol and I absolutely hate the effects of a hangover the very next day.

It’s a catch 22 situation because at the same time, I love mojito’s, caprioska’s – anything with mint and lime and I’m in! – so we just usually have our drinks at home where at least if I were to have a bad reaction or something (which has happened before one too many times), I’m already at home to sleep it off. 🙂

The ambience was so relaxed and chilled out. We just sat down and chit-chatted about the kids playing soccer in the distance, took pictures and made fun of each other until the sun went down. They had the most delicious complimentary snacks – pumpkin crisps and wasabi peas. I was chowing down the snacks like a greedy kid and Mr R had to keep reminding me that dinner was not too far away!

And so here is my darling husband with me at nahm, not realising that we were about to partake in another feast and get so full that we’d feel like a pair of humpty dumpties walking out the door! I don’t know why but we do this all the time – pick a degustation and then struggle through the last few courses because there is just no more space left in those tiny stomachs of ours. Nope, not even that special dessert space left!

It was so long ago that we went that I can’t remember most of what we had! They were all delicious and I would go back again in a heartbeat to nahm or bo.lan the next time we’re back in Bangkok. Only we’ve learnt our lesson now and will be going the “A La Carte” way most definitely from now on. And also, maybe plan our trip so that it coincides with the durian season which will be a delight for me and a nightmare for Mr R. Hehe… 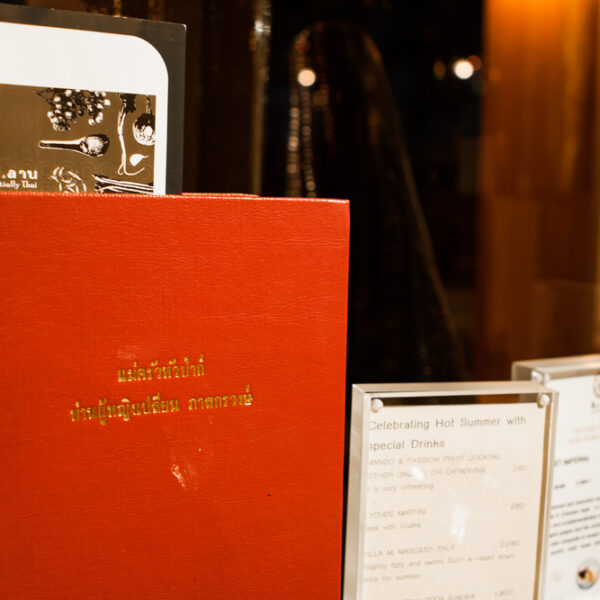 ← Singapore: Bistro Soori
All Rugged Up →